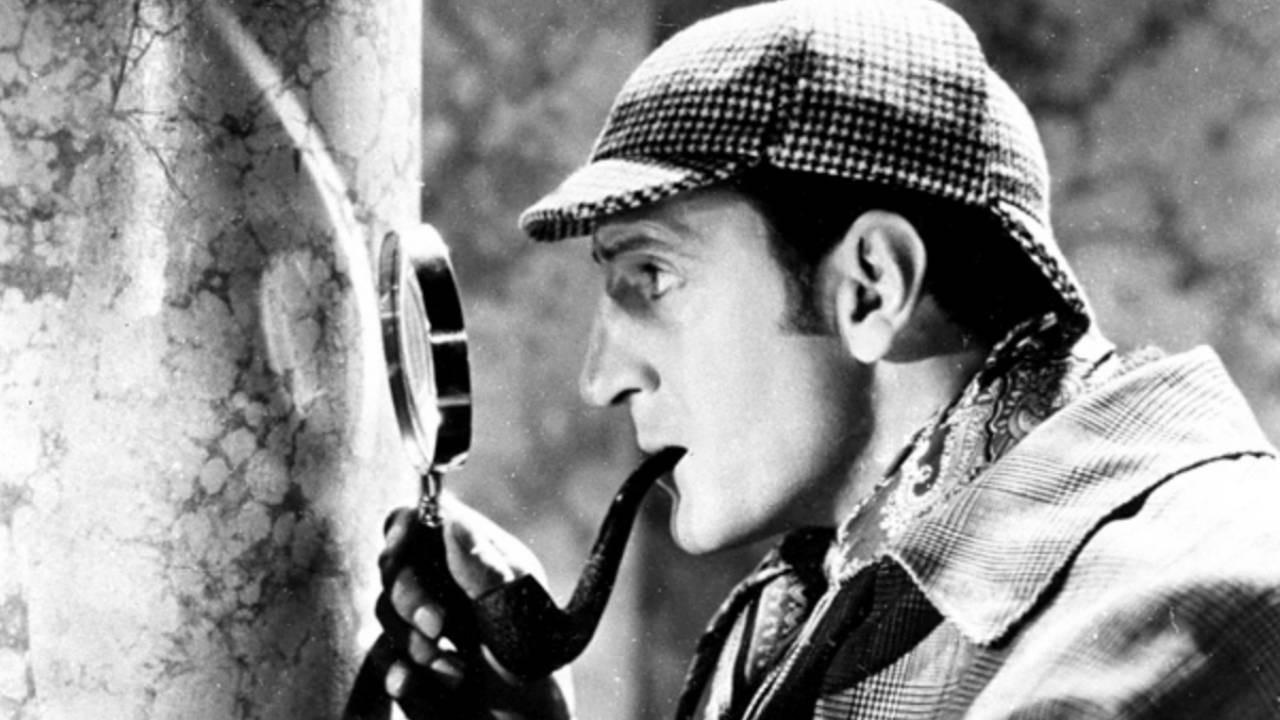 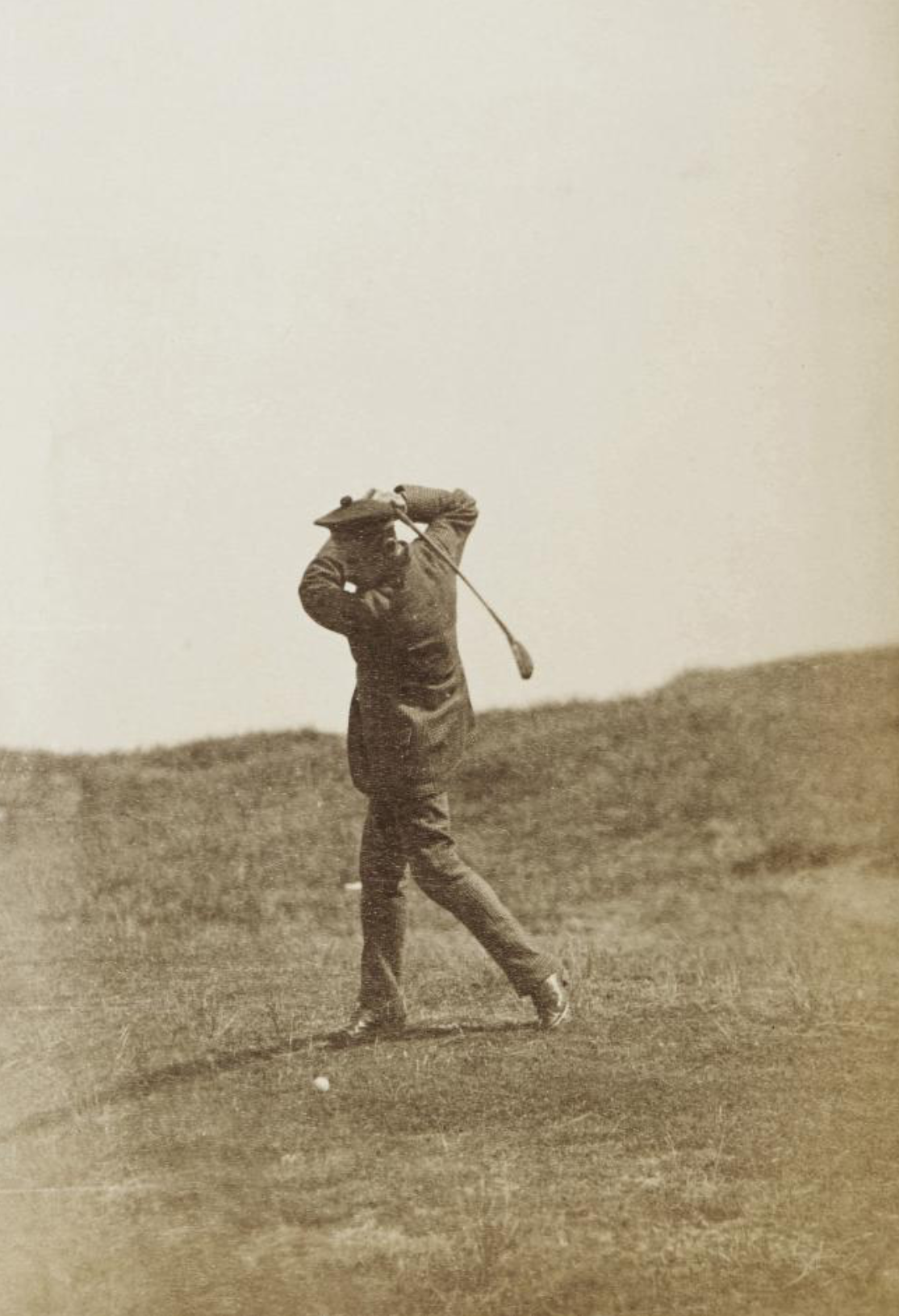 Just on it it’s got T. Morris with a question-mark and I looked at it and I thought "I’m sure that’s Tommy Morris," but then I was instantly sceptical because I’ve never seen a photo of him actually playing the game.

However the more I’ve looked at it, it’s from his moustached phase, it’s got the right bonnet, it’s got the right clothing but I’ve never seen another photograph of him on the links. So we’ve researched it to the extent that we’ve trawled to try to find one of him and failed, so at this point we’re 95 per cent certain that it’s him and it’s here at St Andrews.1

The photograph has been added to the university archives, and is available for inspection on site upon request.2 A copy can also be purchased through the online photograph dealer Old Golf Images.3

In my research, I have used that image of Young Tom to illustrate how some golfers of his era possessed a very full golf swing, known as the "St. Andrews swing," that is comparable to swings used by contemporary players known for their great distance, including John Daly and Jason Zuback: 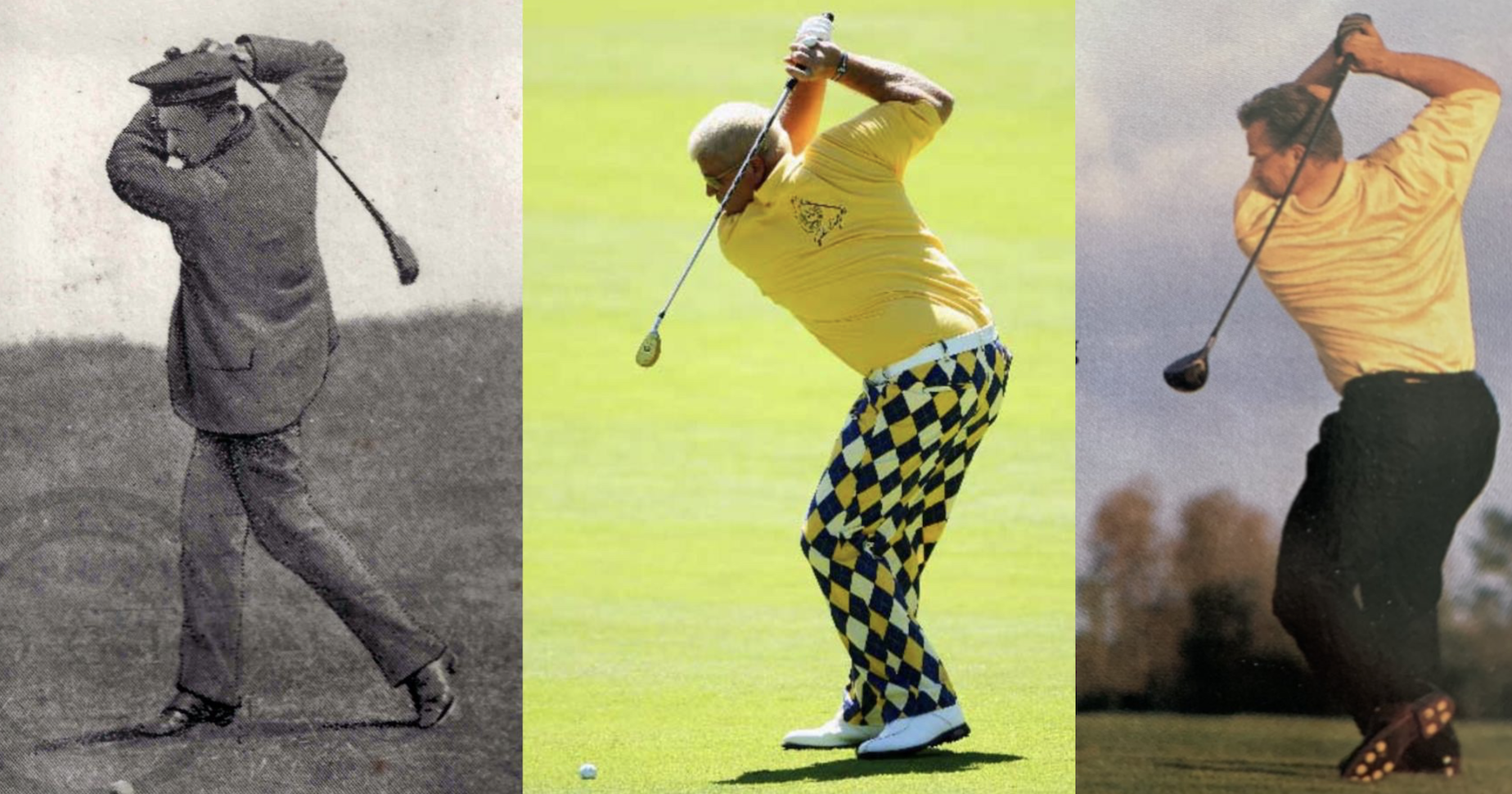 Recently, I have been conducting in-depth research into the evolution of the golf swing, and sought to find more photos of players who used the sweeping St. Andrews swing. In the public domain, there are about a half dozen texts from the late 1800s that include such photographs, including Golfing, published in 1898, by Horace Hutchinson; How to Play Golf, 1897, by H. J. Whigham; and The Game of Golf, 1896, by Willie Park. However, the first book with "instantaneous photographs" of golfers in action was likely published in 1887 and authored by Sir Walter Simpson, an Edinburgh lawyer and, at the time, captain of the Honourable Company of Edinburgh Golfers. Titled The Art of Golf, the list of illustrations includes "plates" of three players swinging the driver: Old Tom Morris; Jim Morris, a name I didn't recognize; and Ben Sayers, a well-known professional from North Berwick, Scotland, noted for his equipment making:4 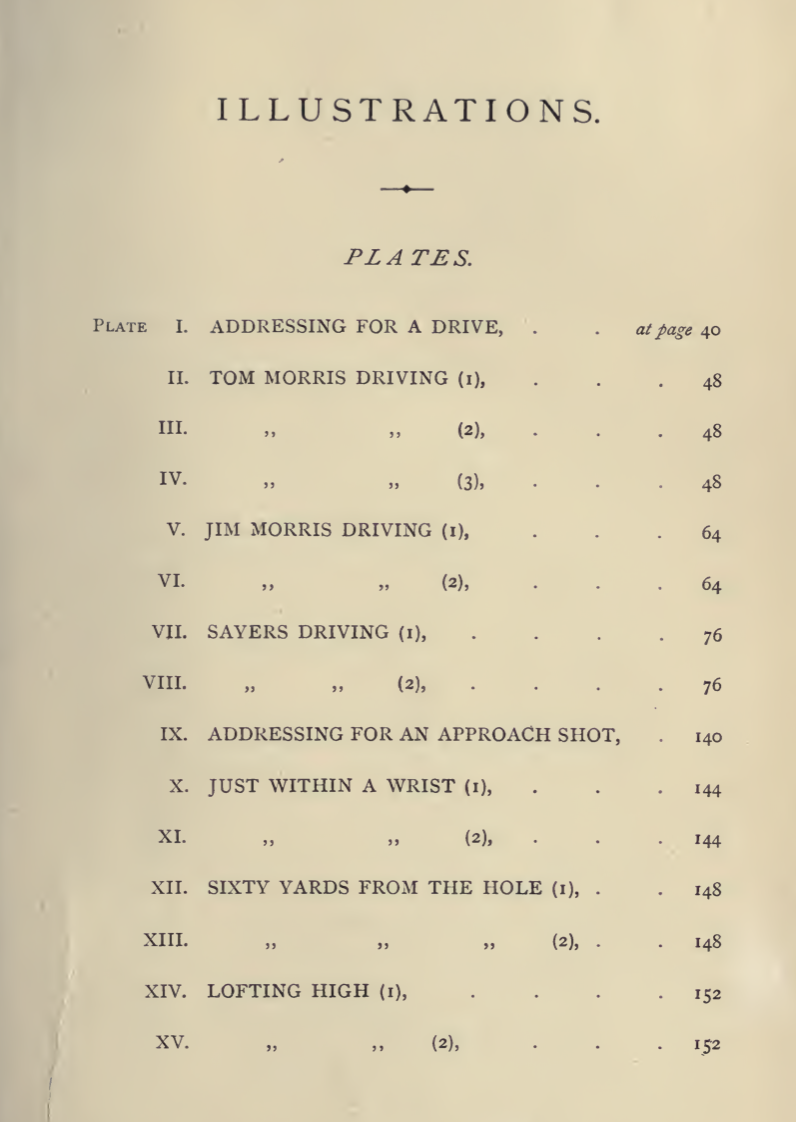 In the PDF copy I have (which was reproduced off a hard copy from the University of Toronto library), the pictures of Old Tom are missing, so I continued to the plates of Jim Morris. I was surprised to recognize the first plate: it is the same as the one discovered in 2015 of Young Tom at the top of his swing: 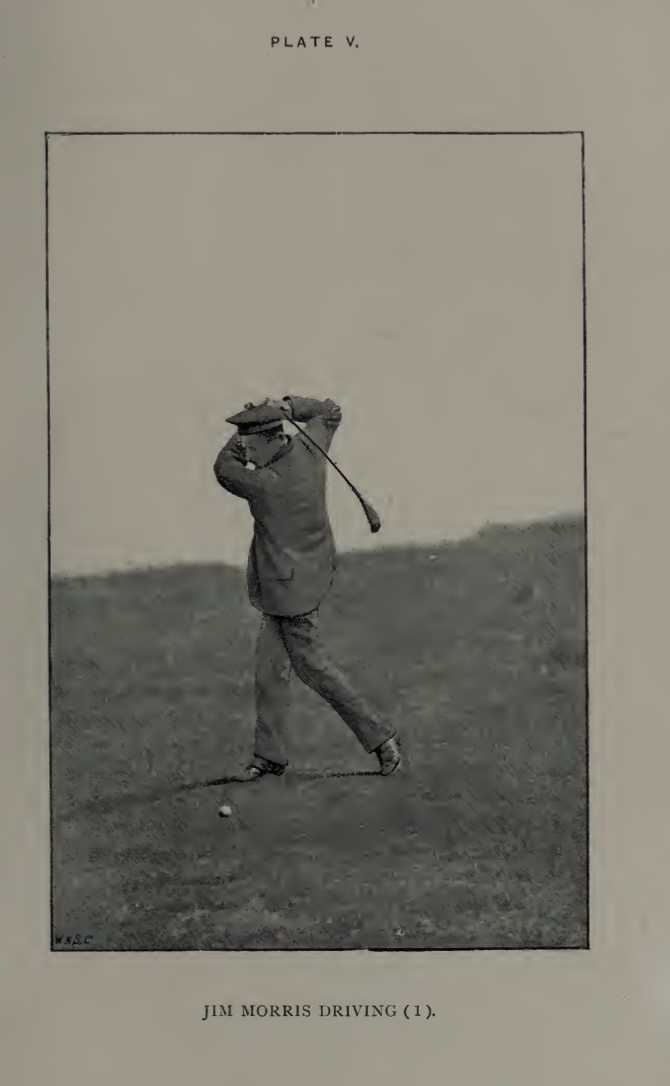 There is also a second plate, showing the finish of the swing: 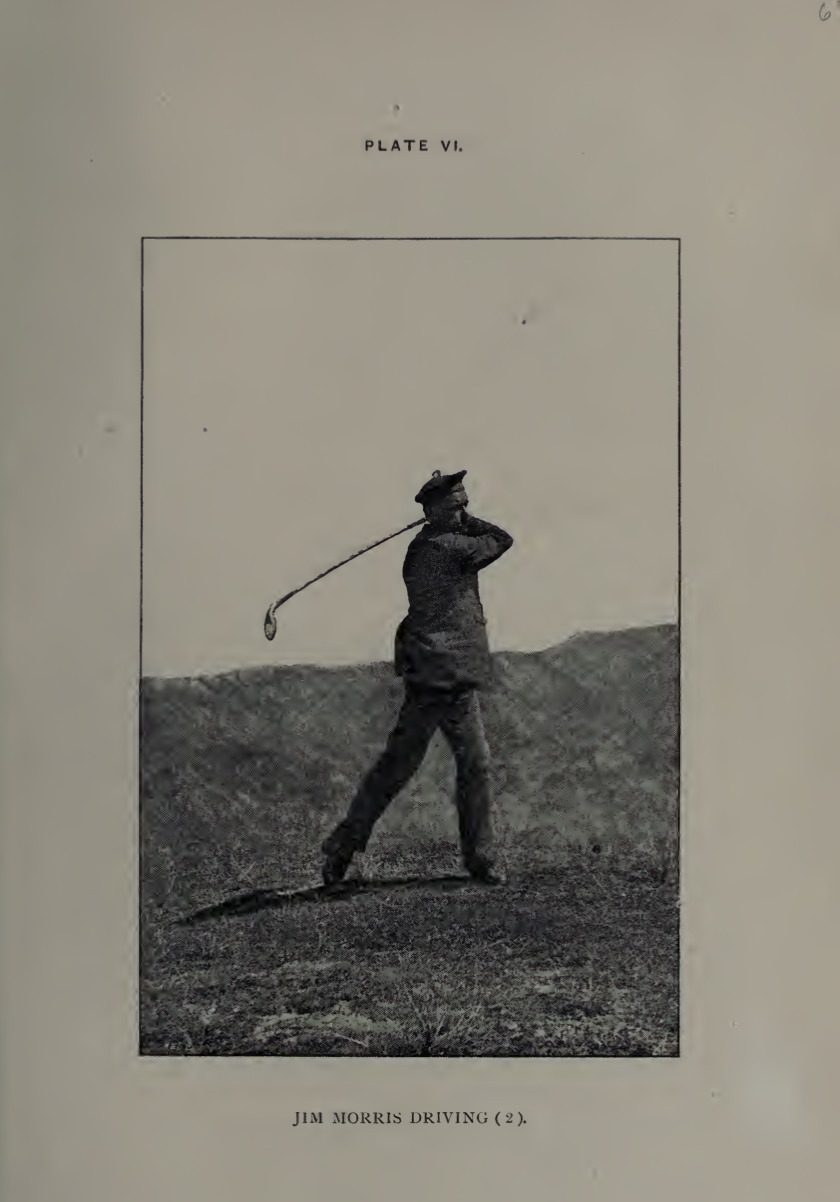 Somewhat confused, I wondered if "Jim" was a nickname for Tommy that had been forgotten over time. But, no: I learned from Wikipedia that James Ogilvy Fairlie  Morris was Tommy's younger brother, not nearly as accomplished a golfer, but good enough to place third in the 1878 Open championship and claim three other top 10s.5 And, like that, it hit me: that wasn't Young Tom Morris pictured at all, it was his younger brother Jim! How could that happen? As best I can tell, it appears to be a case of how the desire of wanting something to be true perhaps dulled efforts to find the truth, despite ample cause for doubt.

As the university's archivist Ledger acknowledged, an obvious clue the picture was not Young Tom was, despite being Scotland's most renowned golfer, no "action" photos were known to exist. In that case, how likely is it that such a picture would remain undiscovered for 140 years (Young Tom died in 1875)?

Second, the pictured swing was not a good match for Young Tom's. While discussing my discovery with biographer Stephen Proctor, I learned that the swing pictured was longer and more upright than how Tommy's actual swing was described. Interestingly enough, Proctor chose not to include this photograph in his recently published biography of Morris, Monarch of the Green - Young Tom Morris - Pioneer of Modern Golf.

As for ease of discovery, it's hard to understand why texts from the late 1800s with photographs of golfers in action weren't reviewed as part of the vetting process. There aren't that many, with The Art of Golf being one of the more important volumes and, naturally, part of the university's collection.6

Similarly, in the university's photograph collection there is a "trading card" that includes the clean-shaven Young Tom on the left, Old Tom in the middle and, on the right, the mustached "J.O.F. Morris," or Jim, wearing the same bonnet as in the subject photograph (the card commemorates the record score of 77 both Tommy and Jim scored at St. Andrews).7 How was a comparison to these photos not made and the clear implications overlooked? 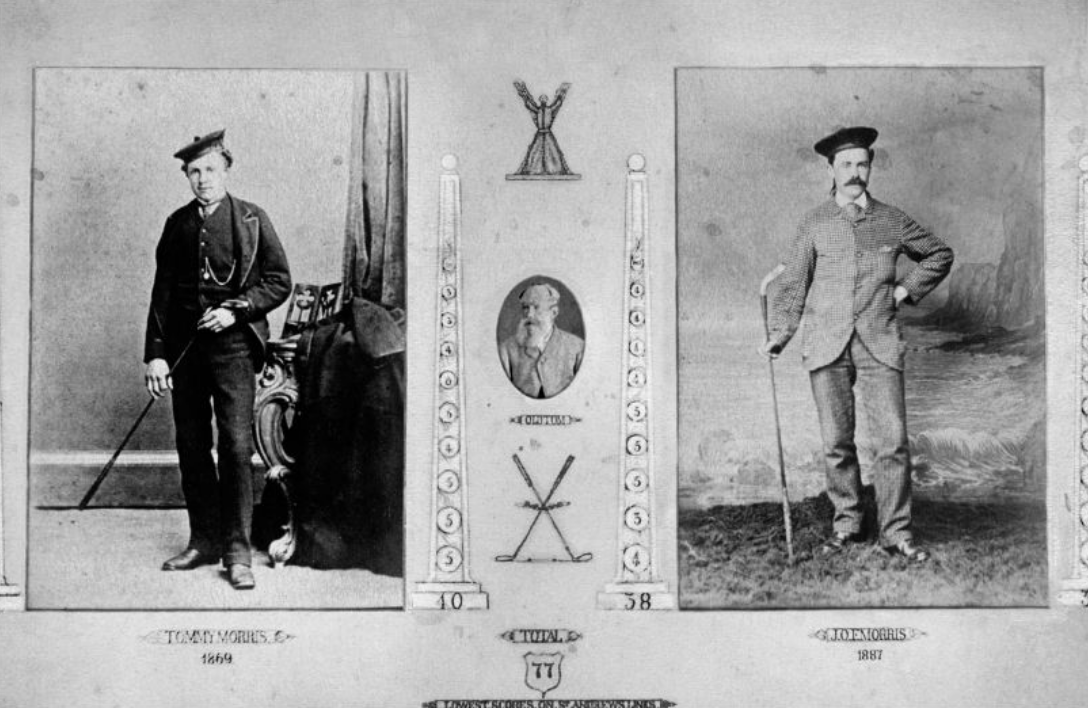 In any case, no matter the cause, the mistake was made and is now exposed, and what was thought to be a historic discovery is lost. On the bright side, perhaps this revelation will elevate younger brother Jim to a higher level of recognition, although not necessarily for reasons he would have wanted!